This past Sunday, Giggles n Hugs (www.gigglesnhugs.com/) southern California’s premiere children’s and family restaurant and play area, hired Jersey Jim to perform for one of their exclusive private parties, celebrating a birthday party for a lucky little girl named Sophie.  The entire venue was devoted just to Sophie’s party and for such an important event, there was just one children’s magician Giggles n Hugs asked for:  Jersey Jim Comedy Magician. 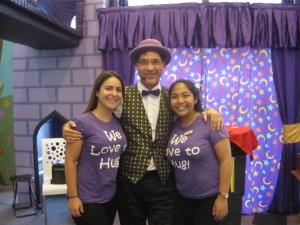 For years, Jersey Jim performed at all three of the Giggles n Hugs locations as their resident magician.  “It was certainly a nice homecoming to return to Giggles n Hugs and see all the friendly staff and managers again,” Jim said.   And, of course, Jersey Jim was a big hit with the children and families.  Many parents said they had never seen children laugh so hard before.  One mother told Jim that he had a gift for entertaining not just the children but the adults as well.  “I was laughing as hard as the kids!” she said.

But Jersey Jim also takes great pride in the fact that he entertains the adults as well as the children.  There is non-stop humor for the grown ups as well as the kids.  Everyone has a great time at the jersey Jim’s magic shows.