This Halloween season, Jersey Jim brought Halloween fun and scares to a Los Angeles Elementary school and helped raise thousands of dollars for the school at the same time.

Jersey Jim did this by presenting his Monster Magic Show at the school, which featured Jim’s amazing transformation illusion which turned an elementary school Father into the Hulk right before the amazed eyes of the students and parents!  This is one of Jersey Jim’s original illusions, which utilizes the same illusion principle as Disneyland’s “Haunted Mason.” 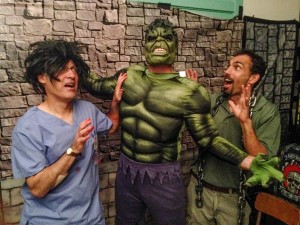 Jersey Jim also contributed another original illusion he created which turned the school’s principal into a living skeleton as pictured below! 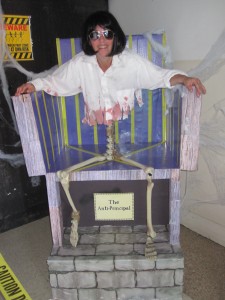 The school raised thousands of dollars while having terrific Halloween spooky-goofy fun thanks to the illusions and Halloween themed magic shows of Jersey Jim!

Schools typically raise from $2,000 to $12,000 in a single night with hardly any work while giving their families a terrific community family event.