Come see me this Sunday, March 16, 2014, in Santa Monica at 18th street and Broadway. Jersey Jim will be doing comedy street magic!  http://www.thesms.org/purim-carnival/ 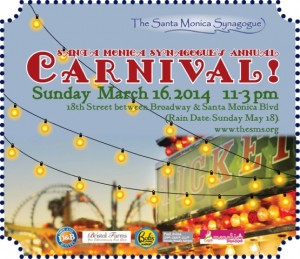 Street magic was one of the secrets that makes Jersey Jim the acclaimed comedy magician he is.  That is because Jim gained thousands of hours of performing in front of live audiences in his early career by performing on the street.  Street performing is considered the most demanding test of a magician.  That is because if you are uninteresting for a few seconds people will simply walk away.  Jim gained vast experience with audiences of all types and ages and cultures which proved an invaluable asset as a performer.  He was also able to hone his routines, jokes, and magical sleight of hand through these performances on the street, working hour after hour in front of new audiences all the time.  Jim loves street performing so if you want to see how much fun it is, come to Santa Monica at 18th street and Broadway this Sunday.  The carnival is also sure to be a great time with food and fun rides for the whole family.  Comedy magic is so much fun and doing comedy magic in the street environment, where the audience gets immediately involved makes it even better.