The recent events in Charleston put me in mind of a personal story I’ve never told.

When my son, Wesley, was 3 and in preschool, one of his friends was another 3 year old named Grace. She was a very sweet girl. When they all went trick-or-treating for the first time, Wesley and Grace were walking from house-to-house holding hands.

One day, leaving preschool, little Wesley told me, “Daddy, Grace and I got married today.” Then he paused and said, “But it was pretend married.” I told one of the preschool teachers about how cute that was and she laughed and said, “Oh, Grace marries everyone!”

Later that year, on MLK day, Wesley was taught about black and white people. I remember being torn about it. I wanted him to know that Martin Luther King was a great man, but I also believed that until that moment, Wesley never saw that there were any black or white people. Just people. Here’s a picture of Wesley and Grace holding hands as they went house to house. 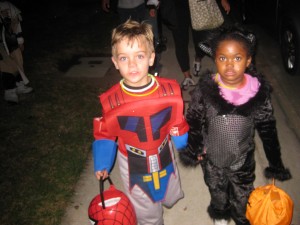 Kids are colored blind.  Kids are also all the same:  they love to laugh, they love to have fun, they love to be involved.  They don’t want to just sit there and watch “a magic show.”  They want to do magic!  Even more than that, children love to feel empowered.  They live in a world where adults have all the power over them.  When they can feel they have power over an adult, that is a joyful experience for them.  Usually, it’s the first time they feel that powerful feeling.  That is what the Jersey Jim Comedy Magic show does for kids.  Every routine is designed to impart this feeling to children every 5 to 7 seconds.  That is why children love Jersey Jim!